One cannot stay silent in a world where silence is demanded by thugs with delude minds and possibly a well founded grudge against the world they lived in.

Islam plays undeniably a part in the Charlie Hebdo atrocities, but at the same time the marginalization, the disenfranchising of youth of alien descent seems to be something we all should be aware of. 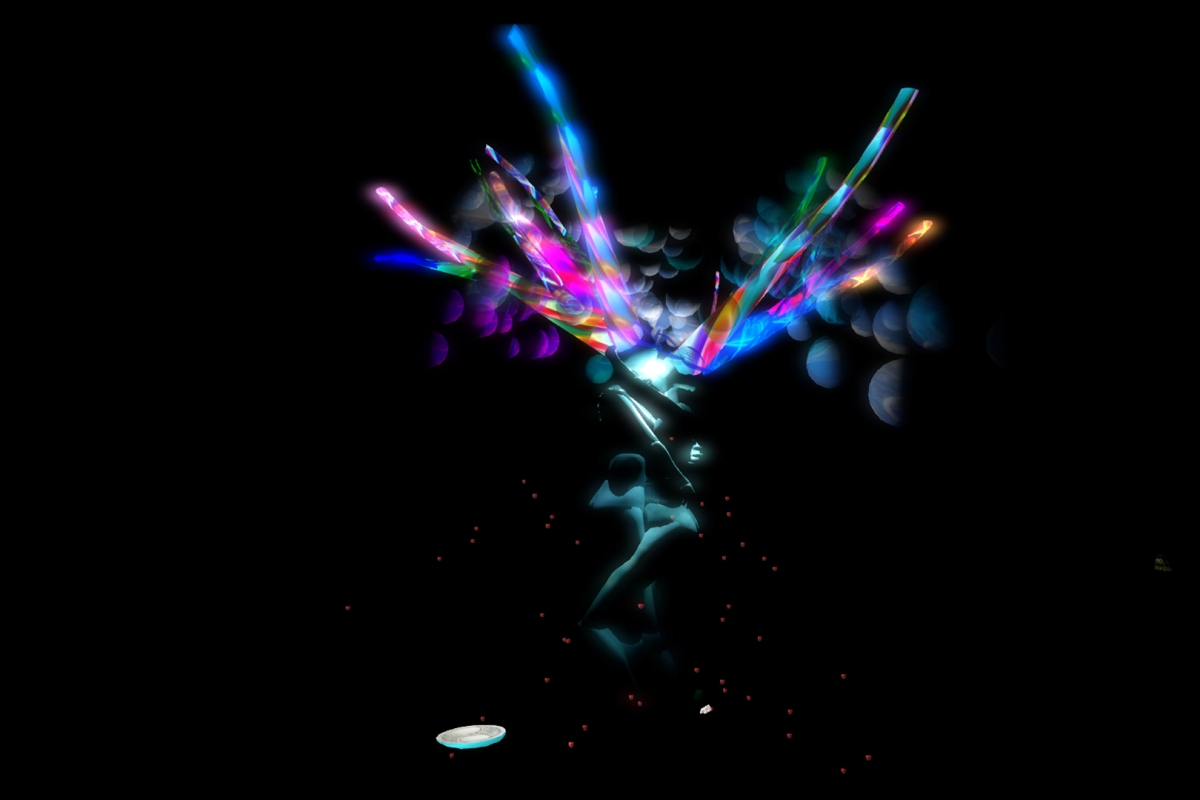 A few days ago Santalarity closed. Santalarity is a spin-off from Burn 2, the burning man art festival in Second Life. Tau hitched a ride on the small train that went around the site and then got sidetracked in a forest. Since I liked this forest with it strange trees, I decided to take some pictures and while I was at it, I took some of the other builds. Unfortunately I did not get all the builds, nor did I get the names of all the artists as some of the builds had already been removed and some were removed after I took a break so that I did have a picture of them, but not the artist who made it. If you know the artist or the name of the art(most did not have a name) then by all means place a comment or mail to meritcoba@gmail.com.

This forest was owned by Miko Kuramoto although it listed someone else as the creator. I just list it under the owner. I find the mesh trees very intriguing sorry so I made a lot of pictures, especially because the forest was on the edge of the sim and it gave the idea that beyond the wood was a vast tundra stretching out. I also took the opportunity to tweak the pictures by using various settings of poster edges and blending layers. The above picture uses poster edged for the trees, but I did not apply it to Tau. I will intersperse pictures with that of the rest of the builds.

This is a view of the center of the sim. It is the central gathering place where sometimes parties are held. Tau never goes to parties as she is too shy. I seldom go because I got other things to go to.

The above picture is from the Empathic Eccentricia build which is made by Veleda Lorakeet, Ohmy Shalala and Tau. The monkey is made by Tau, below is a close up to show the rat sitting in the bowl the monkey hold. The rat hold a camera  has an animation for posing.

This a far off shot of EE. The snowman disappeared when touched.

The other day I asked Veleda what inspired her  to make the talking and moving robot heads for our Monkey Mind build at SL11B(Seconds Life’s 11th birthday) and she said it something along the lines of that is seemed like a fun idea. And here you thought I would write down some overarching philosophical artistic expression. I could make one up of course.. but let’s leave it at this.

It is interesting to see that the builds is actually never quite finished. When Veleda was done with her heads, she added a core to the build, which is funny as I was doing the same. But my idea went along other line’s and it ended up as an arty thingy you can walk through. It is called data towers and the idea I had was to have the data stream upwards towards the central processing unit. But this is not a post about me, but a post about Veleda’s contribution.

Veleda made these robot heads who say Monkey Mind in binary. The name Monkey Mind is a Buddhist  concept, meaning “unsettled; restless; capricious; whimsical; fanciful; inconstant; confused; indecisive; uncontrollable” .  This made me think of the movie Koyaanisqatsi. In the hopi language, the word Koyaanisqatsi means “unbalanced life”. Seems something philosophical filtered into the build after all, ey.
The robot heads are scripted to travel around the exhbition along piplelines of the same color as the eyes. Eventually they end you up at the top level.  Veleda showed me the formula that makes the heads go. If I can find it I’ll post it here someplace. It’s quite mind-boggling. For me that is (not for Taubie).

Next to the robot heads Veleda made a central core unit to which Almut added this warped binary texture.

The core revolves with the various parts having different speed. Will look better on the movie I am trying to make.

And once you are done, you end up in the monkey house. If you take the blue head I think. Otherwise you end up next door.

So I haven’t been posting much to this blog of late because we were busy with SL11B.

SL11B is the name given for the celebrations organized around the 11th  birthday of Second Life and it  runs from the 22nd of June till the 5th of July of this year.  The celebrations are held at a group of connected places(called sims from simulators) where people of different backgrounds  exhibit their enthusiasms.  As such one can find art exhibits next to stands promoting books, people reciting poetry or showing off the latest of fashions or promoting understanding for things like gender dysforia and disability, so basically everything that  you can do or make in Second Life. Except for the things we don’t want to know about, such as porn. No worries there mate, for there are festivals for that to.

As is usual we always got in a bit late so we had to make up for lost time by working extra hard. It wasn’t different during SL8B, SL9B or SL10B.  In addition I was actually not counting on Emphatic Eccentricia(EE) doing something this year, so I organized my own exhibit, which is called The Box and inspired by Schroedinger’s cat.  But EE did something this year, so I joined in that one as well. So this post is about the Emphatic Eccentricia exhibit which is called Monkey Mind.

Now let’s look at some pictures.

This was the first design which was mostly made by Almut Brunswick who took care of the infrastructure. We put my Monkey Head on it, for reason I do not quite know. It was an moment of inspiration, but I can’t actually recall who came up with it.
The idea behind the built is that it was inspired by the SL11B theme: the empires of the future are empires of the mind. The general idea is that the building represents a computer.

This one is a later design in which Veleda Lorakeet add these pipelines which represents data transfer.

The initial build on the SL11B ground. It was considered to be too tall so….

This is the almost final built.  Note the rerouting of the vel’s pipelines. Ohmy Shalala changed the monkey head by replacing the head with brains  and Almut replaced most of the primary objects (called prims) of the infrastructure with mesh. Mesh items are far better looking and take up less space than prims. The ground floor was replaced by and now has a hole with digital texture in it.

This is the final design. Veleda added a core to the system and various other items have been added. In the next post some more details.

Added one more because Almut said she like to see it with the surrounding buildings.

Another one. with a more normal light setting. 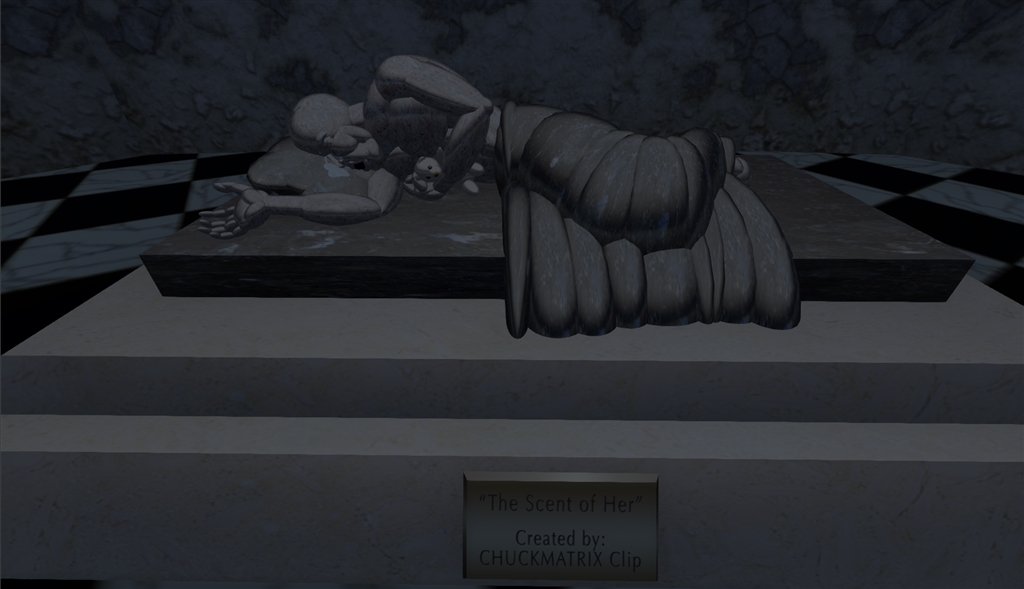 Some time ago I went to a place(sorry I forgot the name) because I felt inclined to do so and there was an exhibition of  the works of various artists. The art that stuck in my mind were these sculptures made by Chuckmatrix Clip.  There are not that many sculptures being made as compared to the amount of pictures(and paintings). The reason for this might have something to do with the fact that is seems more connected to real life then paintings are. It requires the ability to make something from nothing, while most paintings use avatars and other thing already available in Second life. Perhaps a statue or sculpture is more down to earth?

The sculpture that I took pictures of was made with primary objects, called Prims. Prims are basic objects in SL(and worlds like that) that come in various basic shapes like a sphere, a cube, a cylinder.. each of these basic shapes can be manipulated. This statue was made using more than twohundred prims manipulated into various forms. The limit on this is that in Second Life using prims requires an area that can hold them. To get an idea of the cost. I rent a space for eight dollars a week that supports nine hundredth prims.  In other worlds, like the os grid one can rent land that support much more prims. OS grid even allows for a more refined manipulation of the prims.

A movie based on the tale: The masque of the “Red Death” by Edgar Allen Poe. With art work by Lux Ashdene, Misseuro Chau, Taubchen Sonnenkern and Treacle. Music is by Kevin Macleod.