This post about Monkey Mind goes a little bit deeper into the details of our build at SL11B.
The idea behind Monkey Mind was to create a framework in the shape of a computer that would contain the various expressions of the contributing artists. Since artists tend to have their own shenanigans(:)), a project like this, that starts almost at the spur of the moment will somewhat lack overall consistency. While I am writing this down I realize that it might be nice to ask each participant their views on their own contributions, so I will have to add those later, if any.
I am always a bit in doubt of providing explanations. Personally I rather have people make up their own mind instead of having artists spell out what they meant to convey. But then again, how else would we know if what we want to state actually is perceived in that way?
Enough words, let’s provide some pictures and they will be mostly about my contribution as to give me time to ask the others about theirs.

Some time ago I went on holiday to Barcelona. Barcelona has an excellent subway system which, besides providing a fast way to travel around the city, also provides some coolness for the intrepid tourist who braves the heat of the day. Even in May the temperatures rose above the thirty degrees centrigrade(that is into the eighties for you Fahrenheit users). In Barcelona people aren’t much different from people in other cities and during their travels they chase away their boredom by plugging themselves in. Walkman’s, handhelds and various other electronic devices isolate them from their surroundings and transport them into another world . One of the mind. For some people this might be a deplorable experience, I don’t see it as such.  People might not talk to the person sitting next to them, but then again they might be talking to someone at the other side of the world. There is a certain liberty in that you can now choose with whom to communicate and befriend, which might be a good thing, but at the other end, you probably stick with people you feel comfortable with and thus avoiding people who might be different and give you new insights. It opens the eyes and closes them.

This concept inspired me to make the futuravi. Which is this guy/girl.

The futuravi contains two aspects. It is connected to the rest of the world by various devices that opens it’s eyes and ears to a world of the mind.  Incidentally there are lines in the song Jumbo by Underworld that refer to this(the song by the way expresses a great deal of the concept.) So let me quote some lines:

“you pick up the phone  and i’m imagining you.”

The futuravi pushes the idea a bit further because, as in the song, you can imagine the other. That is, you as an outsider can change the way someone looks. This might be a technological possibility of the future. Since our world becomes virtual it is technologically possible for you as viewer to determine the looks of the person you are watching. You might see the one you are talking to as a dragon, while the person sees himself as a human.

To capture this aspect I made this connector-device which allows an other person to change your looks.

This is a pictural instruction I made so that people would follow it regardless of the language they speak. The futuravi jumps on the connector. 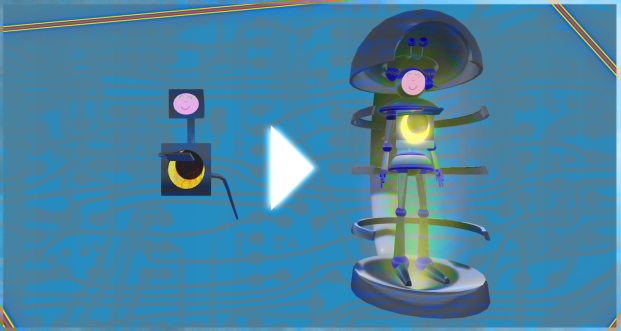 There is a console connected to the device. 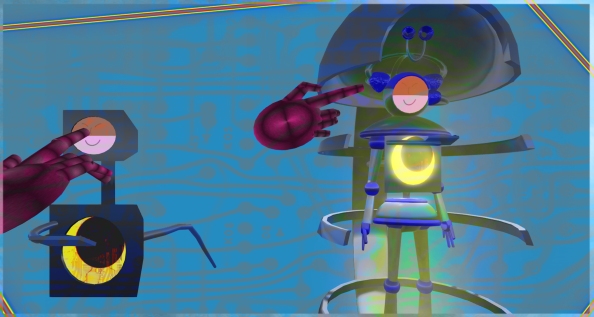 People can use this connector device to change the looks. 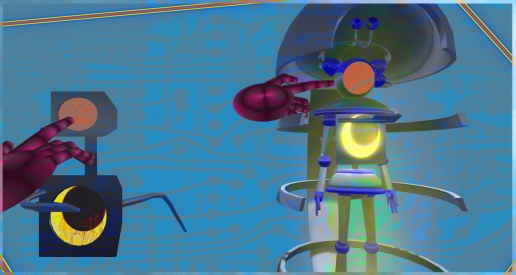 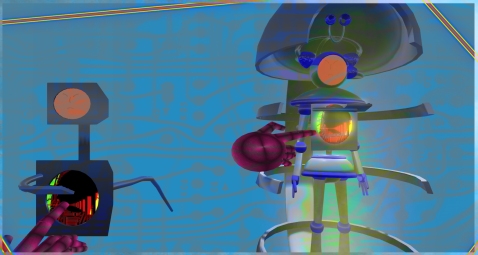 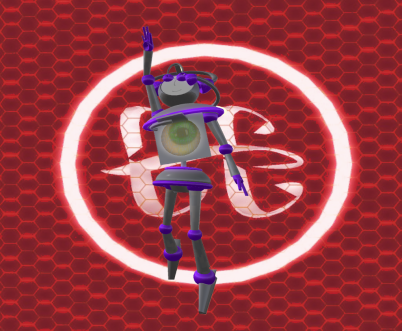 This is the texture I made for an elevator that we didn’t add to the build.

Here is a link to the song Jumbo by Underworld.

“You know I hesitate to say it, but Kate Beckinsale is a really cool chick. I mean I wished she jumped right into my bed, even with those heavy boots and that figure hugging suit. Lucky she found them back after she was blown to smithereens and revived in that laboratory. Although she would have been naked without them. Oh god I could device so ways to relieve them of her.” Henry grinned. He twirled the DVD of the movie in his left hand.

“I thought we were going to keep this pg rated?” Kristl  quipped. She knocked the DVD out of his hand and send it flying.

“She just looks jummy in that suit, even after all these years.. I wished I could have…. Awww.” Henry groaned loudly because Kristl  had just booted him in the shin.

“You like them boots?” Kristl grinned evilly, pointing at her worn combat boots. The kind that were cool in the eighties.

“Pity they left out that cute guy.. what was his name?”

“That one! That one vampire guy hasn’t much of role. Nor that black police dude. And that kid. I really don’t like kids in action movies. This one can’t quite decide to be a hostage or some kind of remake from a Japanese horror movie. If you have to have kids in a movie, make them quiet and don’t turn them into monsters!”

“Without the kid there would be no reason for Kate to go and shoot up everyone. And how she kills: she jumps and somersaults all over the place. And some moments are really cool. Like that elevator scene where she blasts a hole in the bottom of the elevator so as not to be swatted by it when it rushes down. That one is priceless. Look how sexy she looks in that scene.”

“I wished Stephen Rea had a better part in it. I liked him in V for Vendetta, but here he seems a bit lost. And him turning into a what? A werewolf hit by baldness?” Kristl  mused.

“He did look a bit out of place. But overall I think it’s a fun movie with lot’s of shooting and action and Kate Beckinsale jumping around killing hordes of people and Lycans.”

“I think the werewolves -Lycans – are getting a bit threadbare. I wonder how long they keep on being interesting. ”

“Well, they did add that huge one. It was evil how he tossed those cars about and hunted Kate down. That part where he corners her in a booth is funny. Grawww.” Henry snarled loudly, making Kristl  jump.

“It’s not actually not Kate, but Selene.” Kristl corrected, “Kate Beckinsale is the actress, Selene is the name of the heroine.”

“I don’t think it really matters. She might as well be Kate. Without her it would be a boring mindless slaughterfest.”

“I sure do. I am going to start a campaign with the express purpose to get Kate to do all the next underworld movies wearing a tight PVC suit and boots, but with a wider range of guns and weapons.”

“Did you say you were going to wear a tight PVC suit?! That I want to see.”

“I wouldn’t be surprised you get your wish fulfilled. Although the next director might be called Uwe Boll.”

“Uwe Boll. I think he is considered the worst director currently alive.”

“Well.. it doesn’t really matter who directs it as long as Kate is in it wearing a tight suit killing lots and lots of Lycans in various ways.” Henry shouted happily.

“And to hell with the story and the directing..”Kristl  whispered.