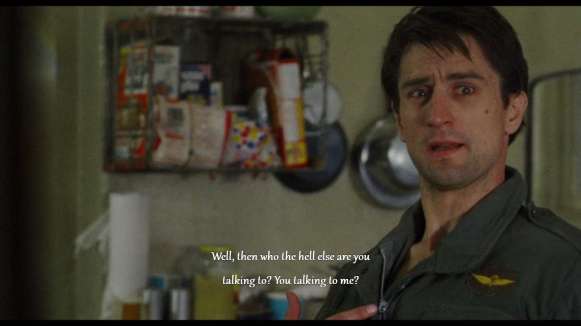 Taxi Driver is about a man who returns from a foreign war to eek out a living  as a taxi driver. He lives in a crummy apartment, without any friends or family in a city that is as distant to him as it is to anyone else. He works in an underpaid job driving random people around.  He doesn’t mind who. As a taxi driver he just transports them.. but he never gets to know them.He is a  man isolated from the world.

He tries to connect to people, but soon enough when he interacts his inner strangeness surfaces to undo any approach. He will not connect.

The whole movie gears to a point.. and at that point we still are not certain what will happen. And when violence finally erupts we might see a hero being made or a villain, but we as watchers know his inner thoughts: he  is just a pistol-shot away from being either a villain or a hero. It is a close call.

Taxi driver is a great movie as it explore the estrangement of  man  alone in a city.The story of this lonely man is well told and supported by music. The cinematography is great. Helped by the scenes of the city. A must see for the story and the combination of music and scenes.