Story telling: In the heat of the night 2/2

In the hunt for key scenes in movies, it was hard to make a decision for In the heat of the Night. In an earlier post I showed one scene somewhat one-third into the movie where Virgil Tibbs is sitting at a train station waiting for the train so he can leave the town of Sparta with its oppressive atmosphere of racism.
Another scene I find intriguing happens about halfway into the movie. Virgil Tibbs and Police Chief Bille Gillespie visit the local big wig plantation owner Endicott played by Larry Gates. The scene is set in a greenhouse where Endicott is tending to  Orchids. After an intro, which is in itself epic, talking about orchids and comparing the meticulous tending of orchids to the tending of blacks the two policemen seem about to leave.

After the discussion about the orchids the suspicion against Endicott grows as fern was found in the car of the victim and fern is used in the cultivation of or orchids. Gillespie makes a move towards the exit.

In these scenes we see Endicott change from amicable condescending, to downright condescending and then the quarter drops. The key trigger is Gillespie who basically uproots the exchange by suggesting to leave.
And you can see Endicott, beautifully played by Gates get suspicious and hostile. For why did they come here? 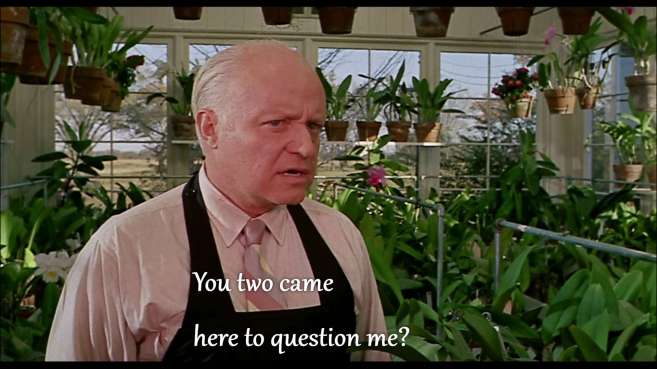 This is a classic WTF moment.

The next scenes move the story towards the slap scene.

Now the roles switches, staying perfectly formal and neutral Tibbs explains their presence, but it is obvious that he feels and acts in no way that Endicott finds acceptable. The ‘Negro’ becoming the dominant one and questioning him.

Gillespie’s presence in this scene is important. He seems like a neutral bystander just watching what is happening.. Steiger plays Gillespie in a way that it is hard to get what he is thinking. People around him vent their opinions, but he never seems to have one. This is a handy way, for people often take it that by having a clear opinion he seems to agree with them.  As the movie progresses it becomes clearer that a kind of respect is growing between him and Tibbs. At the end of the movie this results in a scene in which Gillespie turns around and tell Tibbs to take care of himself.

At this point Endicott drops all pretense of civility and enraged slaps Tibbs in the face.
Tibbs instantly returns the favor, to the astonishment of everyone. 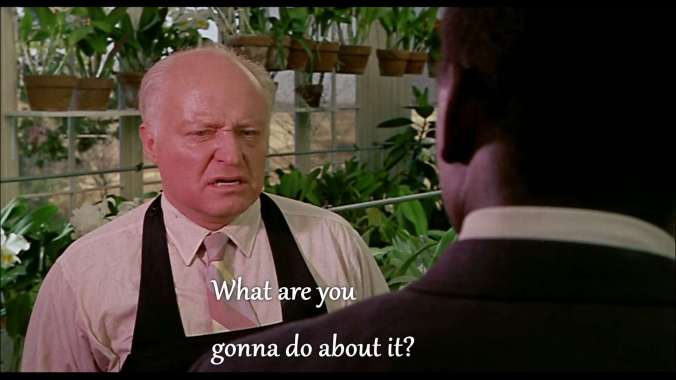 We are now halfway through the movie and Gillispie, a sheriff from a town deep in the south sees a ‘negro’  slap a white man. But this particular negro is a fellow policeman and the suspicion that Endicott might have been involved, which is what Tibbs believe or like to believe, might have gotten hold with Gillespie too.  And  so he doesn’t act. Or rather he acts by not acting. Hence Endicott’s reaction:

The interesting part about the movie isn’t the investigation of the murder. It is pretty pedestrians as murders come. On the face of it, it seems like a movie about racism. And while that is true, it is more about the relation between Gillespie and Tibbs and how this unlikely pair of policemen work together and find common ground and respect. And thus racism might disappear.