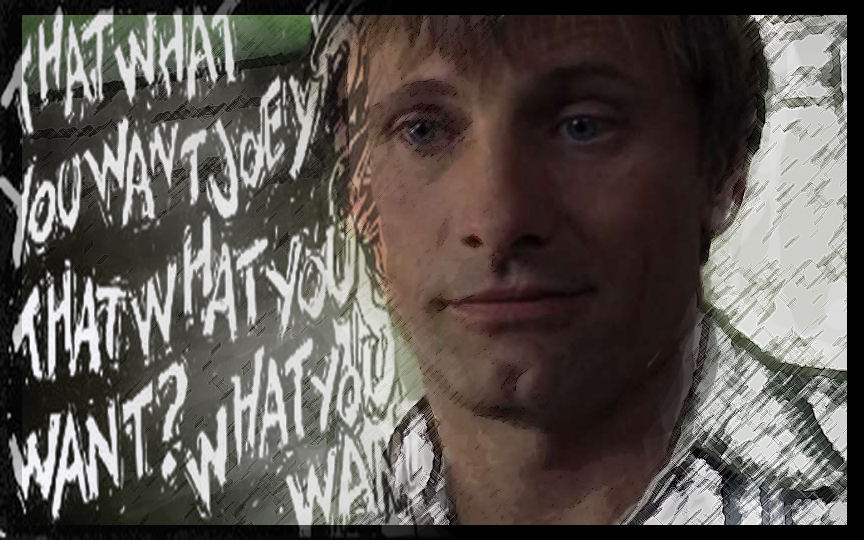 This article most definitely contains spoilers

Carl Fogarty(Ed Harris) has just shot Tom Stall (Viggo Mortensen) whom he deems to be a mobster named Joey Cusack from Philadelphia. He tells him that he should have killed him back in Philadelphia and asks if he has any last words. Tom looks up at him and as Joey he answers, “Yeah, I should have.”

Graphic novels and movies have a thing in common in that they can add to the story by using visuals. And if the visual element is the face of an actor like Ed Harris or Viggo Mortensen who are able to use their facial expressions to express an emotion in a refined way this makes a scene all the stronger.
It is something I often wonder how to exploit in written stories. Would it be possible to write down what happens without the support from  the imagery?

Carl Fogarty frowns when he looks down at Tom Stall.
“You should have killed me in Philly when you had the chance… Any last words before I shoot you?”
Tom looks up. His face almost expressionless as if resigned to fate.
“I should have,” Joey answers and his lips twists into an almost imperceptible thin smile and his eyes gleam.
And Carl smiles back.

For a brief moment they seem to connect. As if they shared a secret between them. As if Tom comes clean with Carl. Like in a confession. Which is interesting as Carl is dressed in black, almost like a priest(see the next scene).

But is what is the reason for Tom’s smile really? Perhaps it is something different .. the next shot in the movie is Carl being blown away by Tom’s son. Is that the reason he smiles? His smile is ambiguous to say the least.

I present another scene. This is the diner where Carl first appears to confront Tom. Carl is questing. Even Carl is not 100% convinced that Tom is Joey although he pretends to be.

The movie up till then is one of uncertainty. Is Tom just Tom, or is he the killer Joey  which Carl thinks him to be.  Tom seems genuine innocent. Look at him. You can see Carl trying to gauge this man. Is he for real? Or is he faking it?
But the question is why? Why does it matter if  Tom is Joey to Carl? Why not just shoot him anyway?

The next scene: social killing

Tom is Joey and he meets his brother Richie Cusack, who is the head of a crime mob . We play the facial expressions in the scene next. We have William Hurt as Richie and of course Viggo Mortensen. Hurt possesses a wide range of facial expressions. Look while he chats with Tom/Joey and look what happens in the background. Richie knows what is going to happen, he orders it.

The last scene: which is the first.

At closing time, near dusk, two men enter a diner in a rural town, sit down and order coffee and cake. When the waiter tells them that they are about to close up, the older man shouts at him to serve them. When the waitress attempts to leave, the younger man stops her , forces her to sit down and locks the door of the diner. Then the older man pulls out a gun. “Do her, ” he orders the younger one.
The second man leers over the waitress.
Then the waiter moves  with sudden speed. He smashes the can of coffee he is holding in the face of the first man. His gun spins away to stop under a table. The water jumps over the counter, grabs the gun, aims and blows the second man through the glass of the door. Then he shoots the first man in the head after that one jabs a stiletto in his feet. A moment of brief violence.

A history of violence is a movie as based on a graphic novel. In a graphic novel the graphics dominate the story line. I would even say, more so than in a movie as graphics can be distorted, twisted, changed. The same applies to movies, given the many ways that a movie can be supplied with an effect, but up to now one sees that most movies are not made as graphic novels, but as movies. There are of course exceptions, such as Sin city because the director is actually the same person as novelist, but even sin city the novel is way different from sin city the movie.

To get you an idea of how the comic looks here are a few pictures.  As you can see, below the dynamics of a novel can add or leave out thing depending on their importance and give it an extra feel through the imagery as presented from picture through picture. In the movie this needs to be done by the actors guided by the script and in history of violence it is the facial expressions that convey the tale.
The interesting thing is this. Graphic novels and movie influence eachother while having their own conventions at the same time. It would be interesting to see how the in turn influence purely written books.