Not a game review: Legions of Ashworld

I deny to do what I seem to be doing.. writing a review about a game.. And in all honestly.. it isn’t. A game review touches on the game as game and should take most aspect of a game into account.  Or at least.. attempt to. The reason I don’t make game reviews is that I do not look at all aspects.. but only at a few ones.. I cherry pick. so to speak. I usually only look at the use of graphics and story telling.
An example is the game the cat lady.. which I have written about it before. As a game it is probably not that good, the puzzles must be fairly easy to solve for an experienced puzzle gamer as I found them easy to resolve and I am not an experienced puzzle gamer. However I like the game because in a way it is unusual and new. It tells a story and uses graphics and style to support the story. It is sometimes gruesome perhaps.. but it is never too shocking.
Now I like to take a look at the game Legions of Ashworld(LOA of short) because it is inspired by the game Lords of Midnight(LOM for short). If you have never heard of Lords of Midnight I would not be surprised. It is a game that was made in the eighties of the previous century and looks pretty awful by current standards. However it was an innovative game at the time because it was one of the first open game worlds in which you were allowed to roam around at will, you could look into the distance, it combined a wargame with a fantasy system and allowed you to win the game in two ways: either defeat the evil army or destroy an artifact that gave the evil lord his power(a third option was to do both.).
Legions of Ashworld is a game that is inspired by Lords of Midnight and those who, like me, have played it feel that similarity.  This similarity can best be seen in the below screenshot.

This is an ingame screenshot of the world. You are actually looking through the eyes of the Lord Taraz towards fortress. Currently you are looking towards the north(the north pointer is highlighted)
You can look all around by clicking on the pointers. When an object is nearby, it  is big and when it is far off it gets smaller. The pictures are thus layered over each to create a feeling of depth. This is very similar to Lords of Midnight.
Like in LOM you start with a small group of people when the war breaks out and you have to recruit the lords of the land, the wizards and even invoke the help of giants.
The initial phase of the game see you gathering your forces while the enemy makes inroads into your country with overwhelming forces. And you will find you won’t be able to battle your enemy until well into the game because you simply lack the troops to do so.
For most of the time you need to keep track of things by consulting the map. Below you see a map from the tutorial that gives you an impression of various symbols. 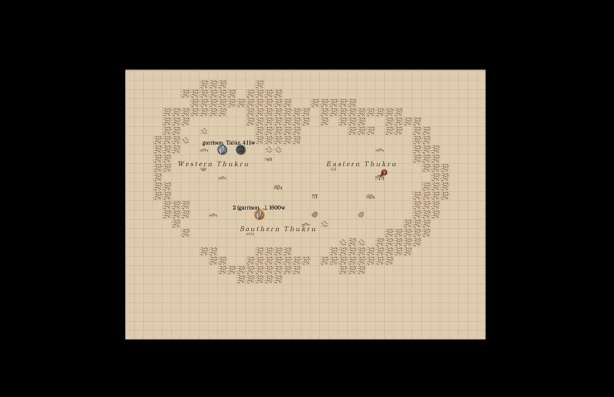 And with that the similarities with Lords of Midnight end.
Lord of Midnight was an epic game that mimicked the essentials of Lord of the Rings. The game came with  a short story that introduced us to the three main characters: Luxor the Moonprince, Morkin and Rothrn the Wise. Thus the characters got a kind of presence. There was a feel and mood created.
Anything like it is lacking in Legions of Ashworld. LOA has no epic feel. It feels as a basic wargame. This lack of epic feel is also caused by the visual style. The makers of LOA have chose for a neat visual style in yellow and earth tone colors and set the tale in a desert environment. The characters have a similarity in look and name and coupled with the lack of background this makes them unremarkable and interchangeable and thus dull. 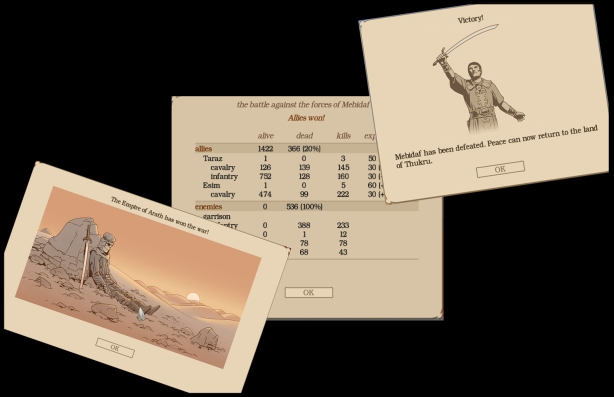 This lack of sense or authentic feeling  coupled with the fact that it is simplistic wargame makes the game interesting for one or two play troughs.. It is a pity for the art style shows promise.. especially when you look at image in the picture above.

Perhaps the maker of this game might try to make another inspired game that captures more of the epic feel that made LOM so great. I certainly would recommend to consider another color scheme and make the visual less..uniform. More colors perhaps or different colors..

Of course a game doesn’t simply get better changing the visuals, but visuals help.